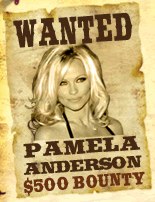 Doyles Room, the fastest growing Internet poker room, is delighted to have former Playboy Playmate, Baywatch beauty, and star of the current FOX hit "Stacked" - Pamela Anderson as a celebrity guest for its popular weekly Bounty Tournament. The bounty tournament is a multi-table poker tournament in which players from around the World compete to be the last one at the table. Pamela Anderson will be the special celebrity bounty guest in the tourney. If you knock out all three bounties - Pamela Anderson, Doyle Brunson and Mike Caro - you win $25,000, plus your share of the regular tournament prize money.

Former Baywatch babe Pamela Anderson is no newcomer to the game of online casino poker. Now the blonde beauty is set to be the celebrity guest in a weekly poker tournament at Doyles Room. Pamela's appearance on the online poker site will make her the most well known celebrity ever to play online poker at the online casinos. Her presence is expected to attract thousands of new online poker fans to the tournament. This is an once-in-a-lifetime shot at sitting next to the beautiful Pamela Anderson at the poker table. Are you ready?

The Bounty poker tournament is a multi-table poker tournament held on a weekly basis. Online casino poker fans are given the chance to face professional poker players such as Mike Caro and Todd Brunson, along with special celebrity guest players. Knock out one or all of the celebrities and win some extra "bounty" cash in addition to the tournament's prize.