The Five Star Poker Challenge - Win Up To $500,000 Plus Aussie Millions' Seats At Party Poker Room. 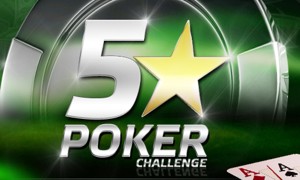 5 Star Poker Challenge - Win your share of $5,000 every single day!
The Party Poker's Five Star Poker Challenge is the new and easy way of giving you the chance to win big money for the whole of December. It's so simple. For every five points earned at Party Poker, you get an entry into $5,000 freeroll the next day. If the player qualifies for five daily $5,000 freerolls, Party Poker will reward the player with a seat at a very special $50,000 finale on 2nd January, 2011.

There's a $5,000 freeroll every day in December 2010, giving you 31 chances to win some serious cash. You can take part in as many as you want - just pick up those five points the day before you want to play. But that's just the start of the Five Star Poker Challenge...

Qualify for five daily $5,000 freerolls and win a seat at a very special $50,000 finale on 2nd January, 2011, where Party Poker will put up a fantastic $50,000 prize pool. Not only that but you can win big with the Five Star Poker Challenge Jackpots:

Make your mark in the Party Poker's Five Star Poker Challenge and pick up those 5 points today.

There will only be one $5,000 jackpot, one $50,000 jackpot and one $500,000 jackpot available for players. Jackpots will be awarded on a first come, first served basis, based on the time the claim was received by Party Poker. To make a claim, players must send an email to info@partypoker.com and confirm their account name.

Qualifiers started on 22nd November with packages up for grabs in weekly satellites to suit both Australia-based players and players from the rest of the world, giving everyone the chance to play in the southern hemisphere's biggest poker tournament.