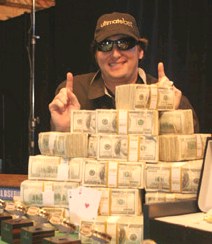 Phil Hellmuth, Jr. catapulted his way into the history books late on June 11th, 2007 with a record-breaking 11th WSOP bracelet win at 2007 World Series of Poker in Las Vegas. Phil Hellmuth entered the final table of the $1,500 No Limit Hold'em event #15 in second place with 1,482,000 in chips. He quickly took control of his opponents and claimed an early lead. Phil's win makes him the only player in history to have won 11 WSOP bracelets. In 2006, Hellmuth captured his record-tying 10th gold bracelet to share the top spot with Johnny Chan and Doyle Brunson. Today, the legendary UltimateBet poker pro leaves their impressive record in the dust.

"This is the one I really wanted," Hellmuth said in a post-tournament press conference. "I have so much respect for Doyle and Johnny. To now be at the top of the all-time (WSOP wins) list is really about as good a feeling as I have ever had."

The record-setting victory marked the largest number of opponents Hellmuth has ever defeated in a tournament. When Hellmuth won the final hand Monday at 7:55 p.m. PDT, he had bested a field of 2,628 participants.

Coming into the 2006 WSOP, the poker superstar from Palo Alto, CA, Phil Hellmuth was one-win behind Brunson and Chan. But he has won the last two titles and taken the lead for the first time ever. He is now all-time leader in wins. Each of Hellmuth's 11 bracelets came from victories in No-Limit Texas Hold'em events. His most celebrated victory prior to the recent record win was his first - at the 1989 World Series of Poker $10,000 No-Limit Texas Hold'em Championship, commonly referred to as the Main Event.

With a total of 55 events on this year's World Series of Poker schedule, Brunson and Chan have ample opportunity to retake a share of the record. Both men plan to play several more tournaments this year, including the Main Event.

About Phil Hellmuth
Hellmuth dropped out of the University of Wisconsin to pursue a poker career. His phenomenal WSOP run over the past 19 years all started in 1988, when he placed 5th in a 7 Card Stud High-Low tournament. He won the main event the following year, the youngest poker player in history to do so - at age 24. He is also one of only three players in history to win three gold bracelets within a single year AND three consecutive WSOP wins in three consecutive days (April 26-28, 1993). In fact, he has been one of the most successful players of the last twenty years. "Hellmuth" has become a bona fide trademark, representing to poker what Tiger Woods is to golf and Michael Jordan was to basketball.