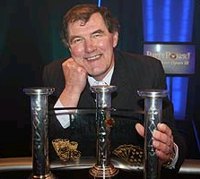 Liam 'The Gentleman' Flood proved there is no substitute for a wise head and experience as he tied up the PartyPoker's European Open in emphatic style to take the $125,000 first prize.

The 64 y.o. retired bookmaker, from County Kildare, Ireland, has been playing poker for the last 25 years, and trounced every barrier in his way with the flood of chips he won from finishing 1st place in both his heat and the semi-final.

Liam did admit he was not wholly confident of victory going into the final: "I was worried about the chip leader John Magill, but I did feel I was in an excellent position. If I hadn't have won the final I would have been pretty disappointed as I had been playing so well."

In a high quality field that included last year's winner Ian Frazer, WSOP star John Magill and European hotshot Roland De Wolfe, Flood found himself on the final table with PartyPoker's World Open champion and form player of the moment Pippa Flanders. However, not even Pippa's customary lucky toy donkey 'Eeemore' could prevent the wily Irishman's victory as he took out Wolverhampton's Darren Hickman in the heads-up finale. Flood has had success in a Party Poker's tournament before, finishing runner-up to Lee Nelson in the World Open in 2005.

A gushing Flood said: "Pippa is a very good player and very hard to read. We met twice previously and had both taken a game each. Luckily for me I have made it 2-1 with this victory."

Liam earned his nickname 'The Gentleman' from Jesse May and Rob Gardner at the first Late Night Poker as he was the only player to always wear a suit and tie at the table, "My winnings from the European Open will be spent on a few new ties," he quipped.

Filmed by Matchroom Sport at Maidstone Studios, the event will be aired exclusively in the UK on Five, with commentary from 'the voice of poker' Jesse May, while Maxim babe Roxanne Siordia will present.

A Party Poker spokesman said, "Liam showed us all just how valuable experience is. He is a legend on the Irish poker circuit and was a true champion from start to finish in this tournament. He seemed assured of victory throughout and never seemed phased by anything. The way he was playing this Flood would have broken the banks of any barrier in his way on the day."