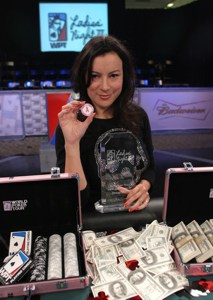 (Los Angeles, CA) - Jennifer Tilly jumped up from the table after winning the WORLD POKER TOUR(R) Ladies Night III™ tournament last night at the Bicycle Casino in California, saying that her win was convincing evidence that her victory in the World Series Ladies tournament in July was "no fluke."

"I felt like I was suffering from the ‘imposter syndrome,' " said Tilly, Academy Award™ nominated actress (Bullets Over Broadway, Monsters, Inc.). "I had these niggling self- doubts. But now I know I can really play. These women were extremely tough pros with blood lust at the poker table. My goal has always been to win a WORLD POKER TOUR event and now I've done it! "

The stunning achievement for a player who only began playing poker a year ago, is like an amateur boxer winning two heavyweight titles. The actress is the first woman to hold both of these prestigious titles in women's poker. The victory earned her a seat in the $25,000 buy-in WPT Championship next April at Bellagio, and a specially-created pink poker set with the WPT logo and Breast Cancer ribbon. The WPT and the Bicycle Casino will donate $10,000 to Breast Cancer Research in honor of Tilly and the other competitors at the Final Table.

"Jennifer Tilly embodies the new breed of player on the WPT," says Steve Lipscomb, Founder and CEO of WPT Enterprises, Inc. "Regardless of gender, age, education, or economic background you can become a champion if you work hard to learn the game. We have always said on the WPT, "Anyone can play, anyone can win." When an actress who has only been playing for 12 months can best some of the best players in the game, you witness the democracy of poker."

Tilly began her pilgrimage to poker eminence by first playing in the WPT Hollywood Home Game series. She then played in the WPT Invitational event which annually pits celebrities versus professionals. There she met Phil "The Unabomber" Laak, a top player who would go on to win that event. They began dating several months later, and she took up the game under his tutelage.

At the award ceremony, Mike Sexton, host and commentator on the WORLD POKER TOUR which airs on the Travel Channel, said, "I nominate Phil Laak for Coach of the Year!"

Laak celebrated with her, saying: "I'm so proud of her. I directed her to read poker books and gave her maybe one piece of advice each week. We'd watch the WPT DVDs and I'd pause them, asking her what she would do and how many "outs" that player had (chances to win). I knew she was finally ready to play tournament poker when it only took her about 14 seconds to come back with the right answer."

For her part, Tilly says the best part of her training was in "Felting Phil (taking all of his chips down to the felt on the table). I loved beating him and then he'd go over to the couch and sulk, staring at the ceiling."

Responds her boyfriend, known for his ultra-competitive style of poker and the hooded sweatshirt he wears at the table, "What can I say? I hate to lose even to my girlfriend." But he said it with a grin.

Tilly said the best piece of advice she ever received from Laak was to "Play my own game. You can read all the books, but you have to listen to your intuition and not do everything exactly as they say. You have to do what feels right."

In recounting her WPT Ladies Night III victory said, "This was tougher than the World Series. There may have been more women in that event to get through, but by the time I was at the final table, I knew how all of those women played. With the exception of Cecilia Reyes Mortensen, I had never played these women before tonight. I didn't know their style and the way the blinds went up, I was forced to be aggressive. Mostly I just didn't want to be the first one out, so winning is incredible."

Tilly says that she was raised by her parents to be non-competitive in a "house with a hippy mentality...always to be the good girl, and be polite. But I love playing poker and especially the WORLD POKER TOUR events because I get to be mean and crush people in a socially acceptable way. I can lie, steal (blinds) and be generally deceptive. Poker lets me indulge my inner bad girl."

Tilly is currently starring in a new CBS sitcom called "Out of Practice" with Henry Winkler, due to air this fall. She plays one of her signature quirky not-very-bright characters. Said Tilly after toasting her victory at WPT Ladies Night III, "Its fun to play dumb, but it's a lot more fun to be smart!"

On the night the show airs, poker fans will be encouraged to supplement the Ladies' Night donation to Breast Cancer Research by purchasing a WPT Ladies' Night commemorative gift from the WPT webstore at www.worldpokertour.com. The choices, which will remain available on the site for several weeks and will include a specially-designed WPT/Breast Cancer Ribbon necklace by Roberto Martinez, with a portion of the proceeds going to the cause. The WPT is the league that launched the poker phenomenon when it first aired on the Travel Channel on March 30, 2003, and it continues to lead the way in developing poker as a major international sport.