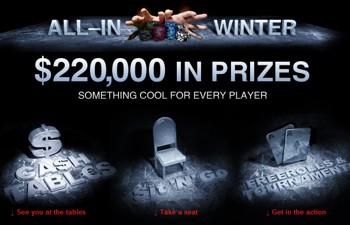 Whether you like Sit 'N' Go tournaments, Cash Tables, Freerolls, or all 3 the popular poker room is giving you the chance to win your way into huge amounts of cash prizes this winter. This is one winter you won't forget!

Cash Tables Races - $10,000 Every Week!
Win your piece of $10,000 every week for 9 weeks in Titan Poker's Raked Hands Races. There is $7,000 cash to take home by playing high stakes and another $3,000 to be won by playing on the low stakes poker tables. Players will be ranked according to the number of Raked Hands they have earned at the different stake levels.

Two leaderboards will be snowing down cash for 9 winter weeks so take part for an extra long Poker playing Christmas this year. Titan Poker races run from Wednesday to Tuesday for 9 action-packed weeks, starting December 1st.

Double Up/Triple Up tournaments are not included in the Sit ‘N' Go races.

Only Sit 'N' Go tables with up to and including 20 players are included in the promotion.

Prize Structure for $10,000 monthly Freeroll implies top 3 prizes as follows: $1,000, $850 and $650. Plus 150 extra cash prizes. With a massive $38,000 left to play for over December and January, the MT3 monthly leaderboard is running strong. Find out how to take your seat and your piece of the Christmas pie.

You've traveled the globe and faced some of the world's best, now its Titan Poker's turn to recognize you for your talent and abilities. Please don't miss out on the special privileges waiting just for you at the Europe's most popular poker room.

Titan Poker's 29th ELITE CLUB Tournament will be held on Wednesday, December 22nd at 19:30 (GMT). 10 SEATS to the Irish Open 2011 Super Sat on December 26th to be awarded to the winners. This is just one of the FREE PERKS that comes with being an Elite Club member.

Titan Poker Tournament Schedule: $500 Welcome Bonus
We are happy to offer you exclusive signup bonus offer from Titan Poker. New members can claim 100% match bonus up to $500 free cash when they follow the Titan Poker links on this page. Join Titan Poker now.