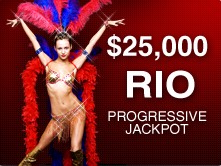 (DOUGLAS, Isle of Man). Playtech's iPoker network, the largest online poker network in the world, has given away $70,000 in less than a fortnight, to the winning online players of their Rio Jackpot promotion.

This month saw one lucky Betfred poker player secure a $45,000 prize in five and a half hours of great play, and only eight days later, a player on Paddy Power won a further $25,000 jackpot.

The Rio is a 6-player, $20 + $3.50 sit 'n' go tournament, available at any iPoker networked online poker room. As soon as six players sit down at the table, the action begins. But the Rio is much more than a regular sit 'n' go tourney... If you manage to win six tournaments in a row, you'll take home not only the regular tournament winnings, you will also receive the growing Rio Jackpot Prize! Finish in either 1st or 2nd place in six consecutive "Rio Jackpot Sit 'N' Go" tournaments and you're entitled to a $300 Prize!

Describing his winning moment, the $45,000-winning poker player said: "It was an absolutely marvelous scene! I invited five friends over and we just partied all night! I felt very satisfied that it was possible after missing the Rio Jackpot a couple of times before. I will be trying the Rio Jackpot again and also Fort Knox [another iPoker promotion] which is actually my preferred Sit 'N Go."

This unique and lucrative tournament will now reset at the starting prize fund, giving players plenty more chances to win a fantastic $25,000 or more. You can take part in the tourney at Titan Poker - the biggest poker site in iPoker Network. Follow the link above to receive 100% welcome bonus up to $500 free for new players at Titan Poker. You will also be eligible for the $2,500 New Depositors' freeroll.

Fort Knox $50,000 Progressive Jackpot
iPoker's rooms pay $50,000 to the winner of six consecutive, 6-player Fort Knox Jackpot Sit 'N' Go tournaments in this poker special promotion! The top prize is progressive, and it grows by $10,000 each week when there is no winner. This is an amazing prize - join the exclusive circle of winners!

About iPoker
Playtech's poker network iPoker has over 35,000 concurrent players at peak time, making it the largest poker network in the world. With a strong presence in Europe, iPoker is the network of choice for the major European gaming brands online looking for record levels of liquidity. With a vast array of lucrative, expertly managed poker promotions, iPoker is the home of the European Championship of Online Poker (ECOOP).