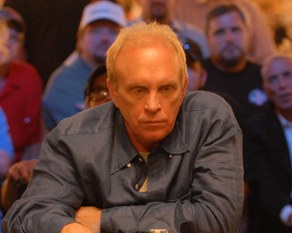 The latest World Series of Poker match was a throwback to an earlier era when poker all was about seemingly endless games, creaky bones, and weary faces. Card after card after card had been tossed and turned and reshuffled again and again. Exhausted spectators who had been standing and cheering hours earlier were now crashed around all sides of the gallery. And in the middle of the darkened poker room, an overhead beam illuminated a green felt table, anchored on each side by two aspiring champions, their faces chiseled with determination.

It all began four long days earlier. The biggest buy-in poker tournament on the planet took place at the Rio All-Suites Hotel & Casino in Las Vegas. Consider that it cost fifty grand - more than the list price of a brand new Cadillac just to sit down in the big game. The 20th event on the 2006 World Series of Poker schedule attracted the toughest compilation of poker talent ever assembled inside one arena. While the world championship main event is still two weeks away, a spectacle that will shatter every previous record in poker history, this far more exclusive competition proved to be the ultimate test of overall poker skill.

Players played a rotation of poker's six most popular games - symbolized in the acronym H.O.R.S.E. - which stands for Hold'em (both limit and no-limit), Omaha High-Low Split, Razz, Seven-Card Stud, and Eight or Better. A field of 143 of the world's best poker players competed over a grueling four-day marathon, which became as much a test of mental and physical endurance as poker skill. For instance, the first day took 14 hours to complete. The second day was even longer. Day Two began at 12 noon and ended at 9:00 am the next day. After playing 21 straight hours, the nine surviving players got some well-deserved rest and returned for a final table which began at 9:00 pm on Friday night.

The 2006 World Series of Poker presented by Milwaukee's Best Light offered spectators and an ESPN television audience one of the most extraordinary final tables ever assembled in the history of the game. The nine players in the H.O.R.S.E. championship had previously won a whopping 27 WSOP gold bracelets combined. Present were former world champions, living poker legends, celebrity superstars, and a few aspiring younger champions who hoped for a breakthrough victory.

The nine finalists in the event were as follows:

The first player to exit was the charismatic European pro, Patrik Antonious. Just three hands into play, the perilously short-stacked Finnish player was eliminated. Ninth place paid $205,920. The next player out took everyone by surprise. Many hoped, and some even expected poker legend Doyle Brunson to win his record-breaking 11th gold bracelet in this tournament. Those hopes were demolished when "Texas Dolly" went out in eighth place. Brunson, the genial Texan with a million dollar smile and arguably poker's greatest player ever, collected $274,560.

Dewey Tomko, who finished second in the WSOP main event on two occasions, had to settle for seventh place. Tomko had spent over twenty years traveling in the same tight-knit poker circles with colleagues Brunson and Reese. So, it was fitting that three of poker's most revered icons were seated side-by-side in this event. The three-time gold bracelet winner from Florida received $343,200.

David Singer, who has recently emerged on the poker tournament scene as one of the game's top players was hoping for a monstrous career breakthrough in this event. He certainly proved he can compete with the best in the world by making it to the big stage against such fierce competition. But Singer fell short of victory and ended up with a sixth-place finish. Singer earned $411,840. T.J. Cloutier has won just about everything in poker except the main event of the World Series. Cloutier, who lives in Dallas, has the best overall tournament record of any player alive. However, Cloutier came up short in this event and ended up as the fifth-place finisher. His prize amounted to $480,480.

Jim Bechtel, a no-limit specialist from Arizona was the next victim of elimination. Bechtel, winner of the 1993 World Series of Poker championship, received $549,120 for his fourth-place finish.

When play became three-handed, Phil Ivey was at a competitive disadvantage. Even a supremely-gifted player like Ivey needs chips and good cards to win. He got neither during his final hour at the table and ended up with mixed results - a disappointing third-place showing, but a healthy profit amounting to $617,760.

The final contest between Andy Bloch and Chip Reese posed two gladiators of similar styles and character. Reese first arrived in Las Vegas 31-years ago, fresh out of college (Reese is a graduate of Dartmouth University). He was on his way to attend law school in California, but instead found his passion and talent for cards and gambling. Since 1974, Reese has won tens of millions of dollars in high-stakes poker games and earned a well-deserved reputation as the world's best all-around player.

Bloch arrived in Las Vegas with a shorter, albeit similar story. Bloch graduated from the Massachusetts Institute of Technology and later earned his degree from Harvard University Law School. Like Reese before him, Bloch opted to gamble professionally rather than work in a more conventional career. He also shared Reese's cerebral personality to a large extent - favoring substance over style, tranquility over bravado, and contemplation over haste.

At 2:00 am, as $1.7 million in cash was brought out to the table, no one in the audience or over the worldwide listening audience on the Bluff Radio Network (carried live by Sirius) could possibly have forecasted the epic match that was to follow. When the sun cracked over the horizon the following morning, the two contenders were still sitting there face to face - thinking, planning, contemplating, strategizing, and searching for the evasive holy poker grail that would pummel the defiant into submission. Together, they played an astonishing 300-plus hands heads-up, twice as many hands as it took to eliminate the first seven players. At one point, spectators who had left the night before began returning to the poker room again, and saw that neither player had yielded an inch in the battle of endurance and psychology.

At precisely 9:12 am, Chip Reece and Andy Bloch shattered a WSOP-record that many thought might never be broken. In the 1983 main event, Tom McEvoy and Rod Peate battled for seven straight hours. This epic duel clocked in at 7 hours, 6 minutes.

Bloch started the duel with a slight chip lead. In fact, he held the lead during most of the match. At one point, Bloch enjoyed a better than 3 to 1 chip advantage. Bloch had his opponent all-in a few times, but was never able to finish off the resilient Reese. On one occasion, Reese was extremely lucky catching a miracle card to make an inside straight to defy the odds stacked against him. Another time, Reese caught a flush to survive.

The poker game of all poker games finally ended when Reese had seized the chip lead midway through the morning and pushed all-in before the flop with ace-queen. Bloch had taken a few tough beats and was so low on chips he had to call with nine-eight. The final board showed J-7-7-4-4, giving Reese the win with the higher kicker (ace).

As the runner-up, Andy Bloch received $1,029,600. But the money was the last thing that seemed to matter to Bloch, who was so groomed to win his first gold bracelet. Very few people outside the poker world understand that this match was not about money. It was about proving something of incalculable value - impossible to describe and too foreign to comprehend.

The winner, David "Chip" Reese collected $1,784,640 in prize money and the gold bracelet, presented by World Series of Poker Commissioner, Jeffrey Pollack. It was Reese's fourth WSOP career win, and his first since 1982. From a historical perspective, the triumph validates the unofficial title Reese has carried throughout his storied poker career, as the world's best all-around poker player.

"Being the best is not just about winning one day or two days - it's every day," Reese said in a post-tournament interview. "Doyle Brunson was once asked who he thought the best poker player was, and Doyle said, ‘I don't know, come back and ask me again in twenty years.' Being the best is proving it over the long run."

Perhaps it is fitting that this championship - what may very well be the most prestigious poker event to have ever been played - would ultimately evolve to a contest of raw strength and iron willpower. A victory in such an illustrious event should not be easy. It must be hard. It must be difficult. By its very spirit and magnitude, winning must be the end result of toil, trial, and tribulation. In this championship, and indeed over the past 30 years, Chip Reese has stood the test of time.