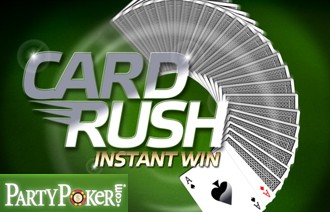 Card Rush Promo
With 1.8 million prize cards up for grabs, everyone can be an instant winner with Card Rush promotion at Party Poker. All the players have to do to earn a Card Rush card is collect just 15 points. Every single card contains a prize, from cash to points to freeroll entries and Card Rush Race points.

Win every single time you collect one of Party Poker's 1.8 million prize cards throughout April, or until 1.8 million cards have been given away. Note: your first Card Rush card for just 5 points. Just earn the points, visit your account and scratch the card to reveal your cash prize. You can collect up to 50 Card Rush cards every day of the great promotion but once we've given away 1.8 million overall, that's it...

Barcelona: Last Chance
The WPT Spanish Championship is one of the undisputed highlights on the World Poker Tour(R) and that's why Party Poker wants to give players even more ways to win a dream trip to Barcelona! There are 4 routes online poker players can take on PartyPoker to try and win one of the extra packages worth €5,500. Each of the four €5,500 packages includes: €3,500 WPT Spanish Championship main event buy-in, €700 spending money and Six nights' hotel accommodation.

PartyPoker.fr Knock out Bruno
Party Poker giving French players another chance to take on Bruno Solo in his exclusive €5,000 tournament this month. As well as the impressive prize pool the room has also placed another irresistible bounty on the star player's head! This month's bounty is - an adrenaline weekend!

The top 25 players in Party Poker.fr daily qualifiers will automatically be entered into the €5,000 Knockout Bruno bounty tournament at 21:00 CET on 25th April 2011 where they will face Bruno and all the other finalists to battle it out for a share of the €5,000 and the amazing bounty. If you think you've got what it takes to take out the famous French comedian, register for a Knockout Bruno qualifier today.

US developments have no impact on Party Poker
The US-facing poker sites of PokerStars, FullTiltPoker and UB/AB have been blocked by the United States Department of Justice. PokerStars and FullTilt have stopped accepting US players and there are widespread reports that players have been experiencing difficulty withdrawing funds. The developments in the US will not have any impact on either PartyPoker brands, because the company exited from the US market after the law changed in 2006. Poker players who are concerned about their accounts with PokerStars and FullTilt will now look for secure alternatives. Party Poker will definitely ensure the save alternative to the players.

$500 Signup Bonus
Open an account today and claim your welcome bonus of up to $500 (click the link below to qualify). Experience playing poker for real at Party Poker and the room will match your first deposit, up to a great $500. The bonus is broken down and delivered to you in 10 bite-size chunks. Just play at Party Poker and you'll pick up slices of your bonus amount as you go. Download Party Poker software and open an account now.