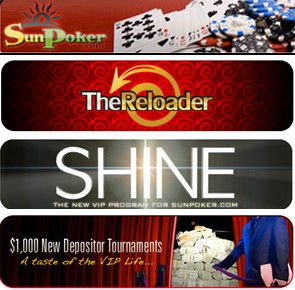 1. Shine, The Reloader, Upcoming Promotions And $1,000 New Depositor Tournament At SunPoker (07/09/2010)  SunPoker's Shine On September 1, 2010, the SunPoker VIP Club loyalty program got a new name and a BIG 200% cash rewards boost. The debut of "Shine," the enhanced SunPoker loyalty program, brings with it not only a sleek new name, but also raises cash rewards over 200% for rake play at all VIP levels. Cash is king and cash game players rule the poker tables at SunPoker. By offering cash game players..

2. Win Five 2010 WSOP Prize Packages Online At SunPoker From 24c (17/04/2010)  SunPoker is offering online players 5 prize packages that will send them to Las Vegas to play in the 2010 World Series of Poker. WSOP Satellites start for as little as $.24 cents. Full Details are below and on the special WSOP page on..

5. SunPoker Now Offers Moneybookers For Players; Get Extra $50 Bonus On Sign-Up (06/08/2008)  SunPoker now have Moneybookers as a deposit and withdrawal option. This will help immensely with new joins especially from Europe as many players have been waiting for Sunpoker to get Moneybookers as a payment option. The poker..

6. Exclusive SunPoker's Freeroll Tournaments This Friday (29/05/2008)  We would like to present exclusive freeroll tournament to be held on Friday at Sun Poker: Name: SunPokerAffiliateFR Date: May 30, 2008 Time: 18:00 GMT Will be listed in the software: 72 hours prior Registration: 24 hours..

7. Sun Poker Room Releases GBP Cashier For UK Players To Save Their Money (09/04/2008)  Starting April 3, 2008, SunPoker has made it easier for online players from the UK and all of Europe to play at their online poker tables. The long awaited British Pound (£) cashier is now available to SunPoker's players..

8. Improving Your Poker Game Before Blaiming 'Bad Beats' - Sun Poker Blog (27/01/2008)  A lot of players claim that they have gotten bad beats all the time, or that they can never win. Instead of doing the logical thing and looking at your game and comparing your results with others and seeing what they can do to..

13. Golden Cup Series of Poker and Caribbean Poker Classic Freerolls at SunPoker (04/06/2007)  Go for the Gold in June! The £500K GOLDEN CUP SERIES OF POKER (GCSOP) is a one-week event consisting of seven separate poker tournaments, beginning on Monday, June 4th and running through to Sunday, June 10th. The GCSOP offers..

15. Seats To The 2007 WSOP Guaranteed - Win Up To $100,000 In One Sick Promo (15/02/2007)  One Sick Promo is rolling into its third month with new online poker players still making the list within 30 days. SunPoker cardroom reported some players had already accumulated 50K+ MPPs in a single month. It's the best WSOP..

16. Freerolls And Other Monthly tournaments At SunPoker In February (04/02/2007)  $10,000 Monthly New Player Freerolls Every month SunPoker will award new players with a ticket to a $10,000 monthly freeroll tournament. All they have to do is earn 100 MPPs (my poker points) within 30 days of registering their..

22. Win Your Seat At The 2006 Caribbean Poker Classic At Sun Poker Card Room - Play Qualifiers And Penny Satellites (12/11/2006)  Imagine all the excitement of first-class poker combined with the beauty, charm and elegance of the Caribbean, complete with endless beaches, emerald green hills and a majestic volcano. Add a tropical rainforest with resident Vervet..

23. EPT Season 3 Schedule And Qualifiers At Sun Poker Room (24/10/2006)  Sun Poker card room is proud to be hosting online qualifiers to season three of the European Poker Tour (EPT). A €6,600 prize package that gets you into the largest and hottest poker tour in Europe. Qualifiers start for as..

24. Stakes Raised To Help Veterans - Wounded Warrior Project (24/09/2006)  Professional poker players are all about the raise, but Kenna James had never seen one so poignant. An 8-year-old boy, watching a veteran who lost both legs during a rocket grenade attack in Iraq, pledged his allowance for the year..

26. Sun Poker And Bluff Magazine Are Hosting A WSOP 'Dream Shot' Free Roll Texas Hold'em Poker Tournament Giving 2 Wounded Warriors Seats To The 2006 WSOP (08/06/2006)  "Cowboy" Kenna James is saddling up for a ride into San Antonio Texas on June 20th and 21st to run the "Dream Shot" Tournament that will end with two Wounded Warriors winning seats to the 2006 World Series of Poker at the Rio Hotel &..

28. $4 Million In Tournaments Every Month At Sun Poker. Play In $600K Guaranteed Six Pak Tournament (21/05/2006)  How many poker rooms do you know that offers $4 Million in Guaranteed Tournaments... every month? Can't think of one? We're not surprised! Sun Poker takes pride in offering the biggest and the best in the world. Check out the current..

30. SunPoker Signs Poker Superstar Kenna James (12/05/2006)  Sun Poker is proud to announce the signing of poker superstar Kenna James to become the face and spokesperson of the brand. Kenna will serve as the captain of "Team SunPoker", and as such will be on a mission to teach every player..