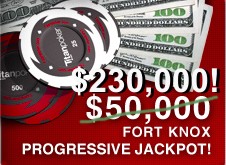 The Fort Knox Jackpot is progressive, and grows bigger each week until someone claims it! And Titan Poker has a compensation prize as well. Finish in either 1st or 2nd place in six consecutive "Fort Knox Jackpot Sit 'N' Go" tournaments and you're entitled to a $750 cash prize!

Although It's not easy to win Titan Poker's Fort Knox Jackpot - but it can be done... Several players win $50K+ Fort Knox jackpots each year.

This Fort Knox Jackpot prizes are awarded according to the following terms and conditions:

1. Players who have won six consecutive 6-player "Fort Knox - Jackpot Sit 'N' Go" tournaments with a buy-in of $50+$9 will write to the Titan Poker support team at support@titanpoker.com for verification, providing details and dates of the tournaments, within 48 hours of the final consecutive tournament.

2. Players who came in second or first place in six consecutive 6-player "Fort Knox - Jackpot Sit 'N' Go" tournaments with a buy-in of $50+$9 will write to the Titan Poker support team at support@titanpoker.com for verification, providing details and dates of the tournaments.

3. The Jackpot prize will be paid only after the consecutive winning games have been checked for any signs of collusive play.

4. Tournaments are considered as consecutive for the purposes of this promotion if their starting times are consecutive.

6. 6 consecutive Sit 'N' Go tournaments with the same 6 players will not be eligible for this promotion.

7. Players from the same IP address, or from the same household, are not eligible to enter the same Sit 'N' Go tournament for purposes of this promotion.

8. A player found trying to enter with more than one account into a Sit 'N' Go tournament will not be eligible for this promotion.

9. The use of offensive language will disqualify a player from winning a Jackpot prize.

10. Any player found to be "soft playing" in order to allow another player to win during the course of a Sit 'N' Go tournament will have his account frozen.

11. To be eligible to receive a jackpot prize the winning series must be completed in a 14 day period.

12. A single SNG jackpot tournament can be used to claim only one jackpot.